Back in the good old days when macho attitudes among workers were permitted, encouraged, and applauded, a co-worker told me gleefully about an incident he was involved in. On his way to a job, he came across the supervisor of a construction crew who was trying to get lumber up a steep grade in his pickup. It kept sliding out. At some slight risk and inconvenience to himself, my co-worker got in the back of the contractor’s pickup, braced himself against the camper top, and put enough pressure on the lumber to hold it in place until they reached the construction site. To his delight, when they got out, the super grabbed his arm, pointed at him, and yelled to the crew, “Hey guys, this is Jesus Christ!”

“Not hardly, pilgrim.” But the supervisor understood: risk and self-sacrifice for others was the same thing that made King Jesus accept the death of the cross. It was just immeasurably tougher for King Jesus.

There’s a ridiculous old hymn that says of Jesus, “He had no tears for his own griefs, but shed drops of blood for mine.” Baloney. After a short life subjected to lies, vicious slander, and rejection, Jesus knew He was going to be crucified. The New Testament accounts of the last hours before Jesus’ arrest and crucifixion make it clear that Jesus knew what was coming, and that He was afraid of it. When He went to the Garden of Gethsemane to pray, He took Peter, James, and John with Him, apart from the other disciples, and said to them, “My soul is overwhelmed, so much so that I am almost dying. Stay here and keep watch with me.” But they soon fell asleep.

Three times, with the sweat of fear pouring off Him, He fell flat on His face and begged God to find another way to complete the mission. But there was no alternate plan.

When the mob came to take Jesus to the chief priests and rulers, Peter pulled out his sword and started to fight. Jesus stopped him with, “Put your sword back in its place! Everyone who draws the sword will die by the sword. Do you think I cannot call on my Father, and he will at once put at my disposal more than twelve legions of angels? But how then would the Scriptures be fulfilled that say it must happen in this way?”

What all of that means is that Jesus knew He was on a suicide mission, ending in a death so horrifying that He asked to be relieved of duty three times. It means that He knew that He could opt out any time He wanted, that there was plenty of support available to extract Him immediately, but if He did, the mission would fail. So He went through a night of interrogation by hostile forces, was harassed and mocked, beaten, spat on, and lied about in a midnight kangaroo court that had nothing to do with truth or justice. 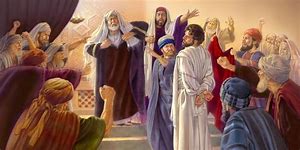 Then things got rough.

I won’t attempt to describe the physical aspects of crucifixion, especially one preceded by the night-long abuse that Jesus suffered. However, here is a link to the most precise, detailed description I have come across, written by a doctor. I strongly advise you not to read it soon before or soon after eating. But if you want to know exactly what physical agony Jesus went though for you, this will tell you.

There is no way I know of to estimate or describe the emotional torment Jesus went through. It’s my opinion that satan was involved in Jesus’ crucifixion from start to finish, and the reason for the long night of abuse, the crown of thorns, and the scourging (which wasn’t a normal part of crucifixion) was not merely to hurt Jesus, but to break Him, so that He would request extraction and let the mission fail.

I suspect that many times during those long hours, Jesus remembered satan’s promise that if Jesus wold worship him, satan would give Him all the kingdoms of the world, because they had been given to satan, and he was allowed to give them to whomever he pleased.

Think about that the next time someone asks you to throw money or time into a political campaign.

It would have been impossible for Jesus not to think of the rescue that was His for the asking as His body was tortured beyond what most of us can imagine.

There can be no excuse for doubting that God loves you. You have a love that you did not have to earn, a love that is strong enough to get you through anything this life throws at you, a love that will not fail you. Will not let you down. Will not betray you. Ever. Under any circumstances.

If – if – you will accept it, and follow Jesus wherever He leads you. Faith in Jesus is not for cowards or wimps. Life may be, or become, easy or easier if you become a believer in Jesus. Or it may become your worst nightmare. Just ask the disciples, who after Jesus’ resurrection were exiled, abandoned by their families, hated by their own countrymen, tortured, fed to lions, or crucified.

Or ask the Mideastern Christians who are enduring the same things, and worse that I will not mention here.

Or ask those who are enduring pain that never ends, or grieving a loss that should never have happened. Yet they are Christians. Many were believers before their personal disasters, but they still believe. They have faced the doubts and questions that suffering brings, and they still believe, and their faith gives them the strength to endure.

I have to tell you that I write this unhappily and fearfully, exhorting others to carry on regardless, because I am a high risk for blindness, and I do not want to live blind. If it happens, I will have to decide – do I accept it? Remain alive and complete whatever incomprehensible mission I am on? I know what I should do, but I have a deep fear of blindness. I’ve had nightmares about being blind, waking up a couple of times believing I had gone blind during the night. The fear was very powerful. I pray that I will never have to face that decision. So I understand that Christians, just as much as non-Christians, have to face terrible choices, and that being a believer in Jesus doesn’t take away the fear. It does clarify things, though.

And those who have chosen to endure have told us that it was worth it, that in spite of fear, doubt, grief, there is still a peace and a resource that sustains them. It may not be easy, but it is possible.

Posted by lawngren
All posts